At least 15 people, including five women and two minors, were killed after incessant rains triggered a massive landslide near Munnar in Kerala in the early hours on Friday. Sources say, at around 2 am a river of mud and debris flattened the settlement of tea plantation workers at a Tata Group estate at Pettimudi, about 10 km from Eravikulam National Park along the Western Ghats, about 25 km from Munnar, officials at Devikulam taluka office said.

Over 50 people are still missing as the rescue teams had to call off the search mission for the day in the evening due to low visibility caused by heavy fog and rains. The remoteness of the area and disrupted communication lines also hampered the operations all day.

Many of the 12 who were rescued sustained serious injuries and have been admitted to a hospital nearby.

Nearly 80 people, most of them from the neighbouring state of Tamil Nadu, were living in shelters meant for Kannan Devan plantation workers where the landslide hit.

Chief Minister Pinarayi Vijayan announced a solatium of Rs.5 lakh each for the kin of the dead. Treatment expenses for the injured will be borne by the government, he said.

The state has been on alert for the last one week following weather forecasts predicting heavy rainfall in the state. The death toll in rain-related incidents since June 1 this year has risen to 51. 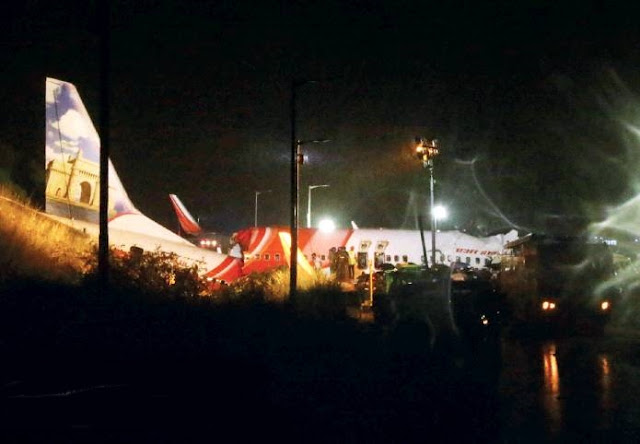 At least 16 people were killed Friday when a passenger jet overshot and skidded off the runway as it landed in southern India, breaking into two pieces.

Dozens of people were injured, 15 of them seriously, after the Air India Express Boeing 737 originating from Dubai touched down in Kozhikode in heavy rain.

The airline said more than 190 passengers and crew were on board the plane that, according to the aviation ministry, plunged 10 metres down a slope off the end of the raised so-called table-top runway.

Television footage showed the fuselage of the jet ripped apart and surrounded by emergency personnel working in the dark, spraying the wreckage with water although there was no sign of any fire.

Aviation regulator DGCA said the plane skidded off the end of the runway and “fell down in the valley and broke down in two pieces”.

One television channel reported there had been a problem with the jet's landing gear.

Air India Express said in a statement that there was “no fire reported at the time of landing.”

It said there were 174 passengers, 10 infants, two pilots and five cabin crew on board the aircraft.

The plane was one of dozens in recent weeks to repatriate some of the thousands of Indians left stranded abroad by the coronavirus pandemic, many of them in Gulf countries.

“My thoughts are with those who lost their loved ones. May the injured recover at the earliest... Authorities are at the spot, providing all assistance to the affected,” Modi said.

The last major plane crash in India was in 2010 when an Air India Express Boeing 737-800 from Dubai to Mangalore overshot the runway and burst into flames.

Kerala has been battered by heavy rains in recent days.

At least 15 people were killed on Friday after a landslide triggered by heavy rains flattened a row of huts elsewhere in the state.

Around 50 other people were feared trapped in the debris. The dead included two children.