At the end of September, Dr Kavita Arora, a psychiatrist, and Ankita Khanna, a psychologist, who have been in a relationship and living together for eight years, approached a marriage officer in Delhi’s Kalkaji to formalise their bond under the Special Marriage Act, 1954. Their request was turned down. Earlier this month, they filed a petition in a Delhi court on the grounds that the rejection was discriminatory and that the right to choose a marriage partner was enshrined under Article 21.

The petition, to them, is an affirmation of the faith that they are equal Indian citizens. “Different (in that we are both women), but not less than any other couple. Equal, free to choose our partner in love and marriage, and live with dignity.” They’re hopeful for what is to come, as firm believers in the transformative power of the Indian constitution.

The couple met at work as part of a child & adolescent mental health team in Delhi-NCR. “In January 2012, Ankita entered Kavita’s office with a cup of tea saying, one of my New Year resolutions is for us to have a ‘better working relationship’. The conversation that started that day just never ended,” say the couple in an email interview.

Also filing a petition, but in the context of the Foreign Marriage Act, are Vaibhav Jain and Parag Mehta, who did a court marriage in Washington DC in 2017 and, last year, a Jain ceremony with a sangeet and reception. However, they were not allowed to register the marriage in India by the Indian consulate. “We completed all the paperwork, went to the Indian consulate and asked them to register our US marriage. They denied us that option,” says Jain. 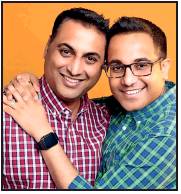 “As a bi-national couple, we recognised that there are certain rights we enjoy in the US that we don’t have in India. For example, if Vaibhav were to fall ill and be hospitalised while we are visiting home, I would have no rights to make decisions about his health — even though I am his spouse and an overseas citizen of India,” Mehta argues. “It was necessary to get our marriage legally recognised in India. Marriage isn’t just a ceremony we perform, it confers rights and responsibilities.”

Arora and Khanna say the pandemic has only made them more certain that they want to get married. “We realise how important it is to have a legitimate structure and ‘name’ to our relationship vis-à-vis the legal, as well as social sanction. For us, what has been very challenging is being able to get an address proof and other related documents for Ankita for this house that we have shared for the last eight years,” says Dr Arora, 47.

Each time they tried to approach authorities for some joint paperwork, they hit a wall. “Even the thought of approaching yet another authority has often prevented us from looking at the possibility of doing things together, for example taking a joint loan, or smaller everyday things like requesting family memberships to our local swimming pool.”