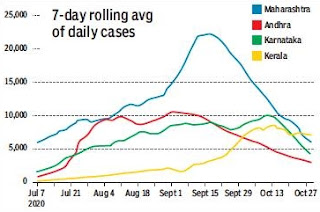 Active Covid-19 cases in the country fell below the 6 lakh mark on Thursday, with the number dropping by more than a lakh in just eight days as the slowdown in the pandemic continued. Meanwhile, for the first time since the pandemic spread across the country in April, Maharashtra has been displaced as the state recording the highest number of daily cases over any seven-day period. Kerala has emerged as the state posting the highest number of fresh cases over the past 10 days, with the seven-day rolling average of the state overtaking Maharashtra’s this Sunday.

No state had crossed Maharashtra’s seven-day count of fresh cases till now. Andhra Pradesh came close in the first week of August but did not overtake Maharashtra. That Kerala has taken over the dubious mantle of the No. 1 state in new Covid cases is as much due to the consistent fall in infections in Maharashtra as the rise in numbers in the southern state. In Maharashtra, the seven-day average has fallen by more than two-third from a peak of 22,149 on September 17 to 6,158 on October 28.

Kerala’s graph peaked at 8,440 on October 15, and has shown a marginal decline since then to 7,089 on October 28. Meanwhile, active cases in the country stood at 5,98,946 on Thursday, as per TOI’s database collated from state government figures. Active cases had peaked at 10,26,945 on September 17 and have been falling since then in sync with the slowdown in the pandemic. This is now the lowest count of active cases since August 5.

India reported 49,070 new cases on Thursday, taking the total caseload to 80,88,182. This was a slight drop from Wednesday’s tally of 50,224 new cases. The day’s death toll was 554, the highest in the past five days. The slight spike in fatalities, which had touched a low of 489 on Sunday, was due to higher numbers reported from Maharashtra (156) and Chhattisgarh. Delhi registered 5,739 new cases on Thursday, its highest single-day tally so far, amid a third surge in the pandemic in the capital. Maharashtra's coronavirus tally on Thursday increased to 16,66,668 with 5,902 new cases, a health official said.