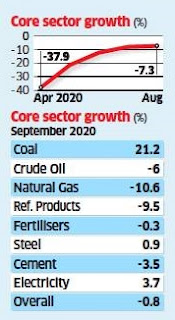 The contraction in eight core industries moderated sharply to 0.8% in September, compared to 7.3% in August, on the back of a robust rebound in coal production, which was aided by a turnaround in electricity and steel. The low base — with a 5% contraction seen in September 2019 — also helped, economists said.

Coal production jumped over 21%, signalling demand from power and other industries using the fuel to blast their furnaces. And, the evidence was there in power generation, which grew 3.7% in September, after falling for six straight months. Similarly, steel output rose 0.9% as most part of the manufacturing sector seemed to be getting back on rail.

Fertiliser, which had been the sole segment reporting growth during the gloomy period since the March-end nationwide lockdown, saw a 0.3% fall in production, while cement, crude oil, refinery products and natural gas remained in the red. Cement has seen lower output for seven straight months, indicating that construction activity — from real estate to highways — hasn’t come back to pre-Covid levels. In case of crude and natural gas, output has been down for at least 13 months, pointing to systemic issues with the two crucial sectors, where India imports bulk of its requirements.