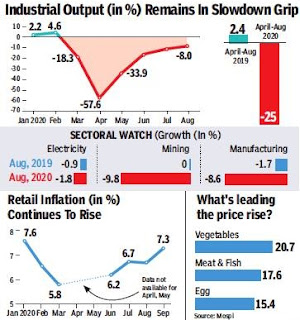 Retail inflation accelerated to an 8-month high in September and crossed the 7%-mark as food prices hardened, dashing hopes of any interest rate cut by the RBI to bolster a faltering economy. Separate data showed industrial output contracted for the sixth month in a row in August but the pace of decline narrowed, indicating the pick-up in activity as the economy opened for business after the strict coronavirus-induced lockdown.

But the inflation numbers remained worrisome with food inflation hitting the double-digit mark in September.

Inflation, as measured by the Consumer Price Index, rose an annual 7.3% in September, compared to the 6.7% increase in August. Rural inflation was at 7.4%, while the rate in the urban areas was 7.3%. The Food Price Index rose to 10.7% in September, higher than August’s 9.1%, the data showed.

While the pace of contraction has narrowed in the factory output data, it still remains in the grip of a slowdown with all the three key sectors — manufacturing, mining and electricity — contracting. The data showed the Index of Industrial Production contracted 8% in August, compared to the 10.8% decline in July and 1.4% fall registered in the year earlier period.

The contraction during the April-August period was at 25%, compared with a 2.4% expansion in the year earlier period.