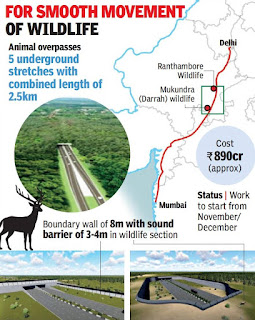 India will see the first five animal overpasses on the under construction Delhi-Mumbai Expressway, which will be on the lines of “animal bridges” in Netherlands for safe passage of wildlife. These have been planned to ensure there are no disturbances caused to the Ranthambore Wildlife Corridor connecting Ranthambhore and Mukundra (Darrah) wildlife sanctuaries in Rajasthan.

Sources said the plan has been approved and forwarded by the Rajasthan government to the central wildlife board and is likely to be taken up next week. The NHAI has given the work to an infrastructure major and the agreement would be signed next week.

These will be natural-looking structures over the corridor and will provide safe passage for wildlife across the expressway. “There will be no chance of any conflict as the wild animals will get such passage at every 500 metres interval. The passages will be developed as part of a forest corridor with trees so that animals find it natural,” said a source.

As per the plan, there will be five underground stretches with combined length of 2.5 km. Officials said a boundary wall of 8 metre with noise barriers will also be installed for the safety of animals in the wildlife section. They said the work would start in the next two months and would take two years to complete.

Sources said the NHAI is keen to complete this project and showcase it as a sustainable model of development and for mitigation of the wildlife-traffic conflict where it’s absolutely necessary to build a road through such corridors.

According to literature, the first wildlife crossings were constructed in France during the 1950s. Countries including the Netherlands, Switzerland, Germany and France have been adopting different types of crossing structures to mitigate the conflict between wildlife and roads running through their habitats.