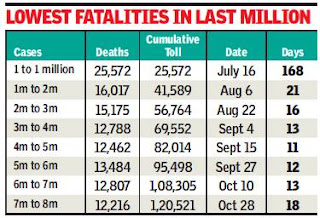 India crossed the eight million-mark in Covid cases on Wednesday even as the spread of the virus showed distinct signs of slowing down with the last one million infections coming in 18 days as against the previous milestone when case tally rose from six million to seven million in just 13 days.

Significantly, with the drop in fresh cases, casualties too have slowed down. Among the eight milestones at the end of each million, casualties were the lowest when the eight-million mark was breached. Compared to 25,572 deaths that were recorded when cases went from one to one million, only 12,216 fatalities were recorded when infections rose from seven million to eight million.

After a gap of three days, the daily tally breached the 50,000-mark on Wednesday once again. With 50,224 fresh cases on Wednesday, India’s cumulative caseload reached 80,39,524, second in the world only to the US which has 87,84,005 patients (according to the Covid dashboard by Johns Hopkins University’s Centre for Systems Science and Engineering).

For the sixth consecutive day, Maharashtra — which had remained the number one state for the most part of the pandemic in daily cases – did not top the Covid chart. On Wednesday, Kerala topped the chart with 8,790 cases.

Maharashtra saw a marginal rise in fresh cases, from 5,363 on Tuesday to 6,738 on Wednesday. However, casualties once again dropped from three-digit figures to double digits as 91 deaths were reported against 115 the previous day. After two consecutive days of reporting 800-odd cases, daily infections in Mumbai once again breached the 1,000-mark, with 1,354 patients testing positive. Maharashtra’s caseload now is 16,60,766 while the cumulative toll 43,554.

While daily cases have dropped substantially in the last few days in most states, infections rose in Delhi to a record 5,673, the national capital crossing the 5,000-mark for the first time. While almost all states are seeing a slide in active cases, Delhi is the only state where fresh infections have surpassed daily recoveries in the last few days.