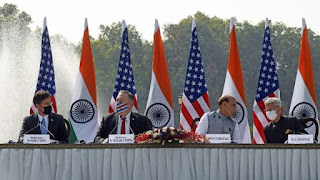 India and the US signed the landmark defence pact, BECA, that will allow sharing of high-end military technology, geospatial maps and classified satellite data between their militaries. The two countries also vowed to ramp up security ties and boost strategic cooperation in the Indo-Pacific amidst China’s growing economic and military clout in the region.

Addressing a joint media event along with Jaishankar, Pompeo and Esper, Defence Minister Rajnath Singh said, “Our military-to-military cooperation with the US is moving forward very well.”

During his visit to the war memorial to honour soldiers, including the 20 that were killed by China’s PLA forces in the Galwan Valley in June.

“The US will stand with people of India as they confront threats to their sovereignty and to their liberty”, Pompeo asserted.

Slamming the Chinese Communist Party, Pompeo said the US leaders and citizens see with increasing clarity that the “CCP is no friend to democracy, the rule of law and transparency”.

The inking of the BECA completes finalisation of four key pacts between the two countries which were identified as crucial to significantly expand the strategic ties.

A pact called General Security of Military Information Agreement was signed by the two countries in 2002. The GSOMIA provides for specific measures to ensure security standards for safeguarding critical information shared by the US with India.

In a major move in 2016, the US had designated India a “Major Defence Partner” intending to elevate defence trade and technology sharing to a level commensurate with that of its closest allies and partners.

The two countries inked the Logistics Exchange Memorandum of Agreement in 2016 that allows their militaries use each other’s bases for repair and replenishment of supplies as well as provide for deeper cooperation.

India and the US signed another pact called COMCASA (Communications Compatibility and Security Agreement) in 2018 that provides for interoperability between the two militaries and provides for sale of high end technology from the US to India.