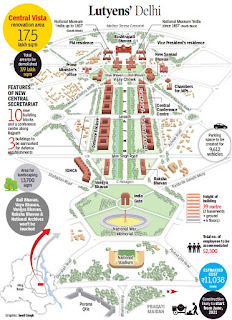 “Three blocks have been proposed for defence establishments and these will require a separate set of security arrangements,” said a source. The size of the defence ministry and other military offices, including that of the chief of defence staff, is considerable in terms of personnel.

It has been learnt that no other ministry will have a specific building earmarked for it because the new structures will each have space to accommodate nearly 5,000 employees. Though there is a proposal to redevelop Jawaharlal Nehru Bhavan housing the external affairs ministry, sources said the ministry has reservations about this and a final decision is yet to be taken. It is the youngest building in the Central Vista area, having come up a few years ago.

The 10 buildings coming up along Rajpath will provide enough space for all central ministries and their subordinate organisations.

The government plans to start construction for the new central secretariat by June 2021 at an estimated cost of Rs.11,000 crore. The project is scheduled for completion in 2024.

The building will have a maximum height of 39 metres, according to the details submitted by Central Public Works Department to the environment ministry for obtaining statutory clearances.

The proposal says while 3.9 lakh square metres of existing built-up area will be demolished, 17.5 lakh square metres will be created. Each building will have two basements parking lots, with none of them providing surface parking. “These buildings will be identical and will have modern facilities,” claimed a source.

Three new buildings will come up on the 25-acre land that is currently occupied by Indira Gandhi National Centre for Arts, which will eventually be shifted to Jamnagar House area after operating from Janpath Hotel as a stop-gap arrangement. Transport Bhavan and Shram Shakti Bhavan will be redeveloped to be used as chambers for MPs and for parking.

As per the plan, during the construction phase of the central secretariat, a maximum of 1,500 permanent workers and 15,000 temporary labourers will be employed at any one time.

Sources said CPWD will also take up the task of repurposing North and South Blocks into national museums.

At a meeting chaired by Lok Sabha Speaker Om Birla in the presence of Union urban affairs minister Hardeep Singh Puri on Friday, it was decided that the monitoring committee would include officials of, among others, the Lok Sabha secretariat, housing and urban affairs ministry, CPWD, NDMC and the project architect/designer.