In 4 days, Mumbai receives 70% of rain for July 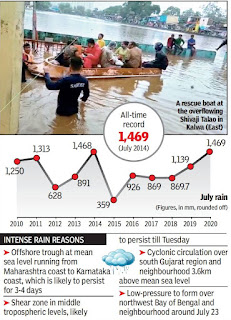 The intense downpour since last Friday has ensured that the city has received more than the entire July average rainfall of 827mm.

The Indian Meteorological Department’s Santacruz observatory recorded 920mm of rainfall for the month till 8.30am on Monday. During the day, it recorded another 36.8mm, taking the monthly total to 956.8mm.

More than 70% of the total rainfall in July was recorded after July 15—once again showing how extreme weather events are getting increasingly common in Mumbai. The IMD data shows over a span of 48 hours between July 15-16 and July 17-18, the city recorded triple-digit rainfall. Meanwhile, since June 1 this year, IMD’s Santacruz observatory has recorded a total of 1,881.4mm, which is also 85% of the season’s average rainfall.

If the rain continues at this rate, Mumbai could record its wettest July ever, considering that 1,468.5mm in 2014 has been the maximum for the month so far. In 2005, when tragic Mumbai floods had followed 944mm of rain in just 24 hours, the month had recorded 1,454.5mm.

On Monday, IMD upgraded its alert for the city from orange to red, indicating extremely heavy rainfall for the entire MMR.

The eastern suburbs of the city and adjoining areas such as Thane and Navi Mumbai, including Panvel and Raigad, recorded “massive rainfall”. Officials said this intense spell is likely to continue. IMD scientist Shubhangi Bhute said, “We expect heavy rain in the coming days as well and a red alert has been especially issued for the Ghat areas.”

IMD has issued an orange alert, indicating heavy to very heavy rain at a few places, from July 20 to 23. It said due to such heavy rain, the expected impact includes localized flooding in low-lying areas, the possibility of flash floods in some localities, minor damage to kutcha roads, landslide, mudslide and rock falls in vulnerable spots, and local disruption of water and electricity.