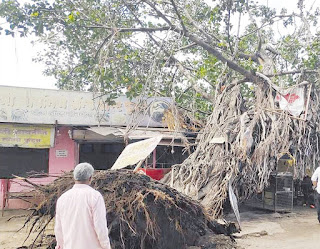 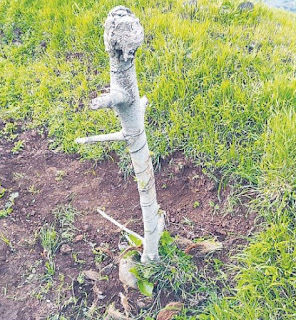 In 1941, when the freedom movement for India’s independence was at its peak, a group of freedom fighters — led by famous folk artist Dadu Indurikar — had hidden in this banyan tree. They had executed a swift attack to stop the British trucks from carrying raw cotton to Bombay port. Unabated development and nature’s vagaries had now weakened its roots, making it fall during a recent stormy night, but the 160-year-old tree at Induri — in the former princely state of Talegaon Dhabade — will continue to live on.

The banyan’s legacy, as it stood strong watching over generations of villagers, will now spread across the village. As many as 1,500 of its branches are being transplanted at Induri on the old Pune-Mumbai highway. The trunk has been replanted as well at a local open ground. Such is the emotional bonding and environmental commitment of the villagers to their green ancestor that they have ensured it continues to stand over them in the future, too.

In early 2020, the locals had protested against and ruled out a proposal to cut the tree down for the road widening. They asserted that not only was the banyan needed for the local environmental balance, it was sacred and was worshipped on Vat Poornima as well as on World Environment. Additionally, the villagers stressed they had an emotional bond with it built over a century and a half. Locals also alleged the tree’s roots had weakened due to rampant construction activities and road widening works on the Chakan-Talegaon Road.

Village sarpanch Nitin Dhore said, ‘The banyan tree collapsed suddenly due to heavy wind and rains. We were all shocked. It was like losing a family elder. We were dismayed to see that it had completely uprooted and thought there was no way it would survive. However, some environment experts suggested we transplant the tree and keep it alive. We immediately agreed and resorted to crowdfunding for money. We transplanted the tree trunk at an open ground of the Pune zilla parishad school.”

He further said, “We called the Maval Jeevrakshak team to rescue eggs and 21 infants of herons.”

Village veteran Vitthal Shinde said, ‘The banyan was a landmark. Every person was emotionally attached to it. We wanted to keep all our memories alive. Therefore, I approached experts and took their advice. Now, every single branch of the tree is being replanted. The history of the tree will live on.”

Local botanical expert Jagannath Shevkar said, “A banyan tree never dies unless it is uprooted due to natural reasons or human interference. In this case, it was naturally uprooted because of rampant developments all around. Transplanting it at the same place was not possible, thus. It was decided that the tree will be planted at a safer place. Moved by the emotional attachment of locals, we also decided to use its branches and create saplings that would be planted all over the village. I hope this will set an example for others to follow.”

He said, “We used cranes and safely shifted the heavy trunk with the roots attached to an open ground. Since it is monsoon, we are cent per cent hopeful it will survive due to the conducive climate.

History researcher Satyasheelraje Dabhade, the 13th direct descendant of Maratha army commander-in-chief Sarsenapati Khanderao and Umabaisaheb Dabhade, said, “My greatgreat grandfather planted the tree during the British rule. It is the very tree where the late folk artist Dadu Indurikar, also a President’s Award winner, stopped British trucks loaded with raw cotton being sent to the Bombay port, and onwards to Manchester for making clothes . Freedom fighters would often hide in the tree’s dense foliage as this entire stretch was heavy with armed police bandobast. The tree was a proud participant of our Swadeshi movement.”