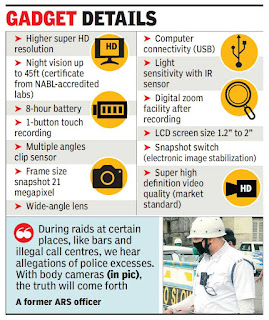 The Kolkata Police has decided to procure 500 body cameras with night vision for cops at the police stations for Rs 1 crore. At present, most police stations have one or two such cameras, which are used in limited operations, like major probes or in important law-and-order deployments.

According to Lalbazar sources, the new gadgets will allow inspectors and sub-inspectors — those in charge of investigations — to use them for live feeds and future references. In a wider ramification, Lalbazar also proposed to ask duty officers of various police stations to use these.

The move to buy this number of the gadgets for police stations comes almost four years after traffic personnel were armed with body cameras and supplied local police stations with at least one or two a year later. The detective department bought 100 such cameras in 2019 to record witness statements during raids.

The cops said the cameras will be introduced to change the perception of common people about police, bring transparency, introduce real-time monitoring and sharing of actual footage for future reference. “The cameras will record the response of the masses. It will go a long way towards addressing the grievances of complainants and witnesses that they were either harassed or not taken seriously by cops,” the officer said.

Officers felt using these cameras will help record not only the scene of crime, but statements of witnesses and suspects. “The advantage is that senior officers can now monitor an operation without actually visiting the site. Since we employ 3D technology in all major cases to map the crime scenes, the recordings can be invaluable,” said an officer.

However, officers — both serving and retired — said the real gain would be the curbing of police “excesses”.

“During raids at certain places, like bars and illegal call centres, we hear allegations of police excesses. With body cameras, we are sure the truth will come forth,” said a former ARS officer.

According to the tender bid, the contractor will have to give three years of comprehensive warranty on all components from the date of acceptance of supplied items. After completion of this period, Kolkata Police may go for fresh AMC with the supplier. “Hence, the bidder should maintain sufficient stock of spares even after the expiry of the warranty period. The contractor is liable for repairing all or any damage detected during the warranty period, free of cost,” the bid stated.