Telangana: Record 1 million saplings planted in an hour in Adilabad 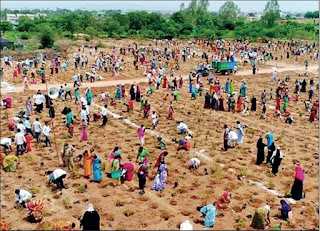 Over 30,000 members of Telangana Rashtra Samithi participated in the Green India Challenge, now in its fourth year, plant a record one million saplings in one hour in Adilabad. Founder of Green India Challenge and Rajya Sabha MP, Joginipally Santosh Kumar, Telangana state minister for forests, environment and science and technology A Indra Karan Reddy, TRS party members, MLAs, political leaders and others committed to saving the environment.

During the event, five lakh saplings were planted using the Miyawaki model in the degenerated forest area spreading over 200 acres in Durganagar of Adilabad rural region. In a span of 60 minutes, two lakh plants in Adilabad rural Bela mandal, 1,80,000 saplings in 45 houses in the urban region were planted. Volunteers ensured planting 1,20,000 saplings on either side of R&B road.

The programme was held by dividing the region into ten sectors where more than 30,000 TRS members and locals participated. With this Green India Challenge is all to break the record of planting 3 lakh, 3,000 saplings in Turkey in 2019 and found space in Guinness Book World Records. “All the programme has been video recorded as per the norms and will be sent to Guinness Book World Records, for making it to the top,” said the organisers.

Joginipally Santosh Kumar congratulated Jogu Ramanna for committing to this noble cause on his birthday and urged everyone to take care of the saplings. Speaking on the occasion, Indra Karan Reddy said that the pandemic made everyone realise the importance of safeguarding the environment and climate. “It made us that we can be vulnerable to many challenges,” he said.

The representatives of Wonder Book of Records gave appreciation certificate to the organisers after observing the plantations in Durga Nagar region. On the occasion, the MLA donated two ambulances to RIMS hospital and requested Joginipally Santosh Kumar to handover the vehicle keys.