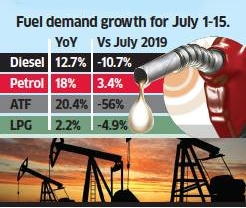 Petrol sales rose above pre-pandemic levels in the first half of July as states eased mobility restrictions and economic activity picked up. Demand for petrol climbed 18% year-on-year and 3.4% over the first half of July 2019, according to data from state-run oil companies, which control nearly 90% of the retail fuels market.

Cooking gas consumption increased 2.2% year-on-year but was about 5% lower than in the same period of 2019.

Diesel makes up 40% of the country’s oil demand and is mostly used in long-haul transport, mining, irrigation and backup generators. It is considered a key indicator of the country’s economic activity.

Diesel sales were slow to recover even last year after the first wave of the pandemic receded, as industrial activity took time to gather pace. Petrol, on the other hand, picked up fast as it is mostly used by passenger cars and two-wheelers.

“Due to the pandemic, people prefer personal vehicles to crowded public transport. This helps the sale of petrol,” said an industry executive. “Diesel sales are more dependent on the larger economic recovery.”