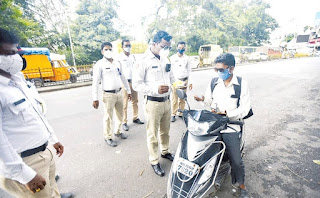 Social media users in the city have emerged as the ‘third eye’ for the Pune traffic police. The tech-savvy citizens instantly track rule violators and make them accountable for violations.

After the traffic police resumed their ‘Click and Send’ special drive, their account on micro-blogging site Twitter, the Maharashtra traffic app created by city traffic police, and the WhatsApp number provided for receiving confidential information are all regularly flooded with complaints, capturing live moments of traffic violations through photographs and videos for prompt legal action.

The public vigilantes have sent 4,566 images or videos of traffic rule violations till July this year, and action has been taken against all the violators by issuing an e-challan and recovering a fine.

After receiving the complaints, they are being examined by a team of traffic police personnel for instant action. The details of action taken on each complaint were also made available to complainants.

The traffic police receive an average of 100 to 150 complaints every day. Noticeably, the majority of the complainants are youths who wish to improve the traffic system in the city.

Deputy commissioner of police for traffic Rahul Shrirame said, “Citizens are getting aware of traffic rules, and we are happy that social media platforms have evoked a warm response for a corrective purpose. We get hundreds of complaints daily which we attend to very seriously. Our team visits the spot and initiates action.”

“Our teams are acting tough on public complaints. We also received photos and videos of police personnel violating traffic rules. Traffic laws and rules are equal for all citizens, and we immediately take action against police vehicles, too. The ‘Click and Send’ drive is transparent — we let the complainants know the details of the action taken.”

Traffic rule violations sent by vigilantes include helmetless riders, violation of lane traffic discipline, use of mobile phones while driving, overload, one-way rule violations, and illegal alteration of vehicles. From January 2021 to July 2021, 472 complaints were reported through Twitter, 397 through WhatsApp and 3,697 through the Maharashtra traffic app.

Action is taken only on credible complaints which specify the time of occurrence and place with clear photographs. Citizens can click traffic violation pictures and share them through WhatsApp on 8411800100 or send it to @PuneCityTraffic on Twitter.