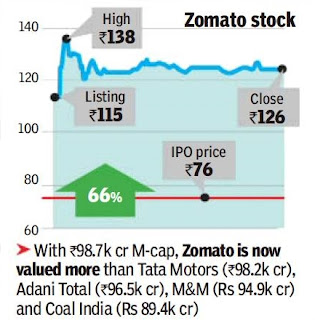 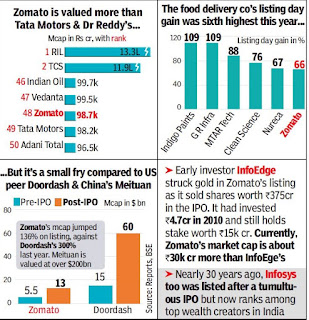 Exactly 30 years after IT services major Infosys listed on domestic bourses, food delivery pioneer Zomato enjoyed a successful listing, which is being hailed as a tribute to Indian entrepreneurship.

Zomato had a stellar opening on Friday as the stock jumped over 53% over its IPO price of Rs 76 on debut to quote at Rs 115. After hitting an intra-day high of Rs 138 on the BSE, the stock finally closed at Rs 126, giving it a market valuation of Rs 98,732 crore, ahead of traditional giants like Tata Motors, M&M and Coal India.

Zomato’s strong debut also proved wrong a lot of Dalal Street pundits and doubters who had questioned the new-age company’s pre-IPO valuation of Rs 60,000 crore. Even those who believed in the loss-making company’s valuation, were expecting its listing gain to be limited at 25%-30%. On July 16, the company had closed its IPO bidding process with an over 38 times oversubscription and advanced its listing date by at least four days to Friday. “The strong debut is testimony that investors are willing to bet big on new-age technology with a disruptive business model,” said S Ramesh, MD & CEO, Kotak Mahindra Capital Company.

Ramesh, one of the merchant bankers that took Zomato public, said, “With growing internet penetration and the smartphone user base increasing month after month, the entire private digital ecosystem will enable wealth creation and further deepen our capital market in the coming years.”

Market veterans said in 1993, the IPO of Infosys was on the verge of being withdrawn till a clutch of market veterans recognised its future growth prospects and bailed it out. The rest, as they say, is history. Over the last 30 years, Infosys has ranked among the top wealth creators in India.

Zomato’s success would give confidence to new-age tech companies planning to go public, along with their merchant bankers, to move ahead, industry players said. Digital payment solutions companies Paytm and MobiKwik, online auto classified company Car-Trade and e-commerce logistics startup Delhivery have already filed for IPOs. There are also a host of other such tech-enabled companies in their late stage of PE-driven growth for which Zomato was a test-case. All these are likely to rush to D Street, they added.

In the run-up to Zomato’s IPO, there was a divide between top fund managers and investors. On one side, Nilesh Shah, MD, Kotak Mutual Fund, supported the recent trend of Indian new-age companies going public, and said the trend had the potential to attract global investors who have burnt their hands in China.

With a market valuation of about $13.3 billion, Zomato is among the top 50 most valued companies in India. On a global scale, it’s still a minnow though. 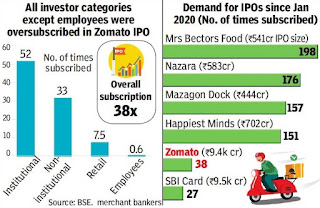