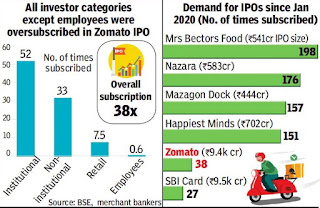 The initial public offering for food delivery major Zomato was subscribed a little over 38 times, led by institutional investors with a 52 times oversubscription of the part reserved for this segment. According to BSE data, the non-institutional (high net-worth investors) portion in the Rs 9,375-crore IPO was subscribed 33 times, while the retail part was subscribed 7.5 times.

Interestingly, the part reserved for Zomato’s employees, the ones who are expected to know the company better than most others, was undersubscribed. Of the 65 lakh shares earmarked for this group, 62% or a little over 40.5 lakh shares were taken by the employees. The total book size at close was for 2,751 crore shares compared to 71.9 crore shares.

The bidding in the offer, priced at between Rs 72 and Rs 76, had opened on July 14. The shares are expected to be listed around July 27.

At the upper end of the price band, the loss-making Zomato will have a market capitalisation of Rs 60,000 crore. The company’s estimated valuation, which is on a par with the total market value of all the listed hotel companies taken together, has been a subject of much debate. Zomato’s estimated value is also equal to the combined market cap of all the listed quick service restaurants in India, which are its customers as well as competitors.

The divide over how to approach a loss-making tech-enabled company is quite wide and palpable. In recent times, Kotak Mutual Fund MD Nilesh Shah said that IPOs of Indian new-age companies could attract global investors who have burnt their hands in similar companies in China.

Chinese new-age companies have lost $800 billion worth of market cap from their top. Successful listing of new age companies’ can re-rate many existing companies, which can pull the market higher from current levels, Shah said without specifically naming Zomato. Successful listing of the company will place the IPO among the top 10 such offers in India in terms of fund mobilisations.

On the other side of the spectrum is billionaire investor Rakesh Jhunjhunwala, also known for his acumen to invest in relatively unknown companies to bring in returns of multiple times. Speaking at a session organised by domestic broking major Motilal Oswal, Jhunjhunwala expressed skepticism about the valuation of new-age companies.

In the grey market for stocks, which are to be listed soon, the premium for the shares of Zomato witnessed some smart rise as subscriptions in the IPO grew during the day.