In the middle of Thar desert, a girls school that needs no AC 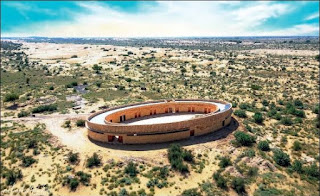 You are in a school in the middle of the Thar desert on a hot and sultry afternoon where the mercury is hovering around 50°C. Add to it the harsh winds that blow throughout the day.

An architectural marvel has come up in Kanoi village, near Jaisalmer’s famous Sam Dunes, with the aim of educating and empowering girls from ‘below poverty line’ families. The Rajkumari Ratnavati Girls’ School is made of local hand-carved Jaisalmer sandstone, and there are no ACs in it. A solar panel canopy on the roof and meshwork on the walls act as the cooling system. Students can study, and even play in the courtyard, without bothering about the extreme weather.

The oval-shaped institution blends in the desert landscape. The school portion, known as the Gyaan Centre, will accommodate 400 girls from kindergarten to Class X when it is fully ready. Rajasthan recorded the lowest literacy rate of 57.6% for women in India, according to a National Statistical Office report of 2017-18. The state reportedly sees a high number of child marriages and has a high rate of female infanticide.

The complex also has a textile museum and performance hall, as well as an exhibition space for artisans to sell their crafts. In another building, mothers of the schoolgirls will be trained in traditional arts like weaving and textiles to preserve dying handicrafts.

It took more than 10 years for Michael Daube, founder of CITTA, a US-based non-profit organisation, to conceptualise and construct the building. CITTA supports development in some of the most economically-challenged and geographically-remote places and works for marginalised communities in the world.

The school was scheduled to start two years ago but Covid prevented that from happening. Plans are afoot to start classes within the next few months after the situation improves. Jaisalmer Maharawal Chaitanya Raj Singh said the school’s oval shape symbolises womanhood across many cultures. The symbol projects infinity and complements the landscape of dunes that merges with the school. It is also how the children play in circles or the women work in a community, he said. Singh said Jaisalmer Foundation president Manvendra Singh had provided 22 acres to Rajamata Rajeshwari Devi and he himself collected money for the school from Mumbai and New York. Initially, the school will have up to class 5, which will be later upgraded up to class 10.

The school will also provide midday meals to ensure proper nutrition for the children, says the CITTA website.