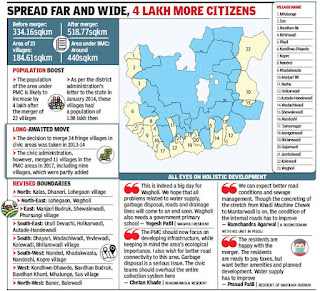 The Maharashtra government on Wednesday issued an official notification merging 23 villages around the city with the Pune Municipal Corporation, making it the largest civic body in the state.

The PMC’s total area is 518sqkm as against 334sqkm earlier. The area of the Brihanmumbai Municipal Corporation is around 440sqkm.

Unlike previous mergers, all 23 fringe villages spread over 184.61sqkm, including Wagholi, Khadakwasla and Pisoli, have been “fully” included in the PMC limits, said the state urban development department’s notification issued under the Maharashtra Municipal Corporations Act,1949.

Population in the PMC areas is estimated to increase by four lakh following the merger. According to the district administration’s letter submitted to the state government in January 2014, these villages then had a population of 1.98 lakh.

Around 900 citizens had filed suggestions/objections to the state’s draft notification in December 2020 for including these 23 villages. Most of the objections had stated that the inclusion of these villages in municipal limits would further stress the PMC administration.

The residents of Wagholi, Khadakwasla, Sus, Manjri and the other areas merged in the Pune Municipal Corporation limits on Wednesday can now expect infrastructure development and provision of civic amenities, while the civic body would have the challenging task of meeting their high expectations.

A senior official from the Pune Municipal Corporation said the civic administration would certainly require more employees and better budgetary allocation to look after the merged areas.

“The civic body cannot rely only on the taxes to be collected from new areas. We shall need dedicated funds to carry out developmental works in the merged villages. Also, the existing manpower is overburdened. Provision of more staffers is necessary to cater to these areas. The PMC will have to conduct surveys and studies in new areas, for which the administration will require manpower,” the official said.

Mayor Muralidhar Mohol and BJP city unit chief Jagdish Mulik also demanded allocation of funds for the development of the new areas. “The merger is a welcome move, but the state government will now have to allocate at least Rs.9,000 crore for the development works. Even the civic administration, in its feedback, had recommended the state government for allocation of Rs.9,000 crore for the merged villages. The government will also have to sanction new posts and fill up the vacant posts in PMC,” Mohol said.

The town planning experts stressed that PMC would face the challenge of holistic planning for the overall development in these areas, besides handling illegal constructions and encroachment. Otherwise, the development would take its own time, they said.

Town planning expert Ramchandra Gohad said, “We have examples of the villages merged in the city in last few decades still waiting for overall development. The new areas being included should not continue to face similar challenges.”

Gohad also questioned the need for merger because the government had already established the Pune Metropolitan Region Development Authority to handle the peripheral areas.

Several residents of the merged villages hailed the move, though.