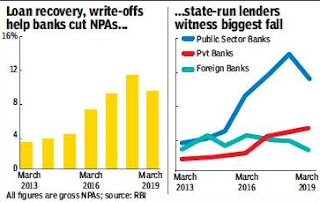 After rising for seven years, non-performing assets reported by banks are showing a decline, helped by a conducive policy environment and the Insolvency & Bankruptcy Code, the Reserve Bank of India said in its report on trend and progress of banking in India, a development that brings some cheer for the financial sector and policymakers grappling with the problem of bad loans.

The report also pointed out that the credit growth remained muted while the health of cooperative banks continued to decline, marked by the crisis in city-based PMC Bank.

The gross NPAs declined to 9.1% in March 2019 from 11.2% in March 2018 as recognition of bad loans neared completion, the report noted. “Decline in the slippage ratio as well as a reduction in outstanding GNPAs helped in improving the GNPA ratio. While a part of the write-offs was due to aging of loans, recovery efforts received a boost from the IBC,” the report said.

The restructured standard advances to gross advances ratio began declining after the asset quality review in 2015 and reached 0.55% at end-March 2019,” the report said.

Recovery of stressed assets improved during 2018-19 mainly because of resolutions under the IBC, which contributed more than half of the total amount recovered. However, recovery rates yielded by major resolution mechanisms (except Lok Adalats) declined in 2018-19, especially through the SARFAESI mechanism.

“Cases referred for recovery under various mechanisms grew over 27% in volume and tripled in value during the year, leading to a pile-up of bankruptcy proceedings. This highlights the need to strengthen and expand the supportive infrastructure,” the report said. Experts said a turnaround in credit growth is unlikely soon.