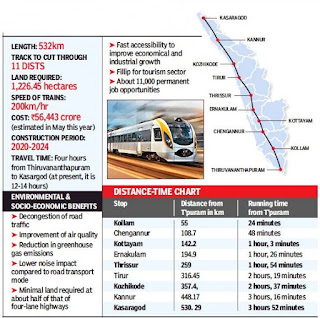 The semi high-speed rail covering a length of 532 km beginning from the capital and ending at Kasaragod will have stops in 10 districts in the state, barring Pathanamthitta, Idukki, Palakkad and Wayanad.

According to a transport department’s note, the southernmost stop is Kochuveli, where the stop will be adjacent to the existing Kochuveli railway station. The next stop for the train will be in Kollam that will be close to national highway bypass, followed by Chengannur and Kottayam, where the stops will be on the eastern side of the towns. At Ernakulam, the stop will be situated near Infopark in Kakkanad, while the next three stations — Thrissur, Tirur and Kozhikode — the stops will be adjacent to the existing railway stations.

While in Kannur, the station will be around 1 km away from the existing railway station, in Kasargod, the station will be adjacent to the existing railway station. Once rolling, the project is expected to be completed by 2024, when the ridership, as estimated by Systra that had conducted the feasibility study, will be 67,740 persons per day. The ridership figure has been projected to 1,47,120 persons per day in 2051, steadily increasing over years.

The project is expected to cost Rs.56,000 crore, for which the government has launched discussions with multiple agencies. Discussions are progressing with KfW (German Bank) for $1 billion (around Rs.7,100 crore), with Asian Infrastucture Investment Bank for another $1billion,with Japan International Cooperation Agency for $3 billion and other agencies. In addition, the government is also planning to launch green bonds for raising money and discussions have been held with IIM, Ahmedabad, for devising green bonds. The money raised through green bonds will be earmarked for financing projects that are environment-friendly.

The government is also looking for value-capture financing method which is being pushed by the ministry of urban development as a resource-mobilising method. Under VCF, the property owners who are in the vicinity of the public infrastructure projects and would benefit from the increased property value due to the project will have to pay additional taxes to the government.