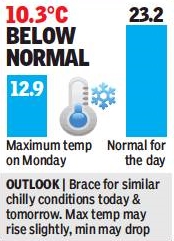 Delhi froze to the bone as a once in-16-years December chill swept the city. Gloomy overcast conditions, a persistent fog and icy northwesterly winds combined to make it the coldest December day since 2003 with the mercury touching a maximum of 12.9 degrees Celsius – a gaping 10.3 degrees below normal.

The met office described it as a ‘severe cold day’, when the maximum temperature was way below the normal level. The last time Delhi saw day temperatures lower than on Monday was on December 25, 2003, when a maximum of 12.6 degrees C was recorded.

Brace for similar weather over the next two days, the met office said. The minimum temperature on Monday was 10.2 degrees C, which meant the mercury moved just 2.7 notches through the day. Met officials said very low cloud cover across the northern plains blocked sunlight and strong winds raised the wind-chill factor, turning the city into a virtual icebox.

“The dense fog in the plains has not lifted completely and got trapped in the cloud cover. What made it really chilly was extremely cold winds from Himachal Pradesh and J&K,” said Kuldeep Srivastava, scientist at IMD.