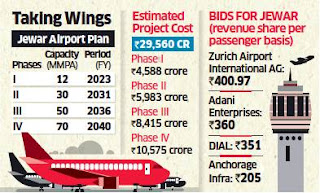 Zurich Airport International AG said it has won a bid to build and operate the airport in Jewar, Greater Noida, which will be the second such facility in the Delhi NCR area. It’s expected to be operational in about four years.

“Under a 40-year concession, Flughafen Zürich AG will build and manage the new greenfield airport in Jewar,” Flughafen Zürich AG, which owns Zurich Airport, said. “The capital investments associated with the first phase is expected to amount to roughly CHF 650 million (about ₹4,670 crore) during the construction period of approximately four years in the first phase.”

Zurich Airport outbid three others, offering a revenue share of ₹400.97 per passenger to the Yamuna Expressway Industrial Development Authority, according to people with knowledge of the matter. The GMR Group-led Delhi International Airport Ltd had offered to pay ₹351 per passenger.

Of the other two bidders, the Adani Group had offered ₹360 and Anchorage I&I ₹205 per passenger, they said. This marks Zurich Airport’s re-entry into India after having fully exited Bengaluru Airport in 2017.

The GMR Group couldn’t exercise its Right of First refusal — which it has by virtue of being the operator of Delhi airport — as the difference between its bid and the winning one was more than 10%.

The existing airport in Delhi is set to be saturated by 2023-24, based on its current annual capacity of 70 million passengers, according to a government study. However, the airport is adding capacity to double this to 140 million passengers annually over the next decade.