Imports decline for six months in a row 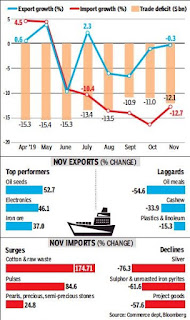 India’s trade deficit widened to the highest in three months as imports registered the sixth straight monthly decline, falling nearly 13% to $38 billion, while exports dipped 0.3% to $26 billion, which was the fourth consecutive month of decline.

Although the pace of decline has moderated, trade remains a key worry for policymakers, with exports seen to be crucial for the revival of industry. On the other hand, imports are seen to be symptomatic of overall economic activity, which has resulted in a decline in demand for raw material, inputs and capital goods.

Crude oil imports were a key factor in shrinking of imports, as it fell over 18% to $11 billion. While demand for oil products has come down due to economic downturn, the commerce department pointed to a 3.7% fall in Brent prices to suggest this may have been behind the decline. Non-oil imports fell over 10% to $27 billion, led by a 12% decline in gold shipments. But the numbers suggested that slowdown had an all-pervasive impact, with transport equipment imports falling almost 50%, while iron and steel, metals, chemicals saw a sharp decline too. 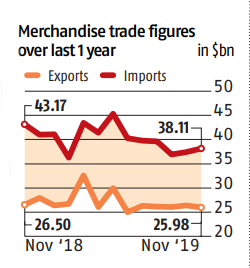