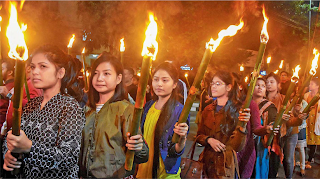 Protests were held in the Parliament complex and elsewhere across the country against the Citizenship Amendment Bill.

While Indian Union Muslim League MPs protested in front of the Mahatma Gandhi statue on Parliament premises, the All India United Democratic Front demonstrated at Jantar Mantar and held up placards saying that the bill was against the very idea of India.

In Assam, the bill is facing huge protests as the people say that it will nullify the provisions of the Assam Accord of 1985, which fixed March 24, 1971, as the cut-off date for deportation of all illegal immigrants irrespective of religion.

Protests were held in all major cities of Assam, with shops being closed in Guwahati following a shutdown call by various organisations opposing the bill.

In Agartala and West Bengal also protests broke out.

The 48-hour Assam bandh called by the All Moran Students' Union to protest against the Bill affected normal life in several districts on the first day, officials said. The police resorted to lathicharge to disperse a group of agitators who clashed with police personnel in Dibrugarh and Guwahati while trying to stop movement of vehicles.

Meanwhile, Section 144, which prohibits assembly of more than four people in an area, was imposed in Assam’s Sonitpur district on Monday.