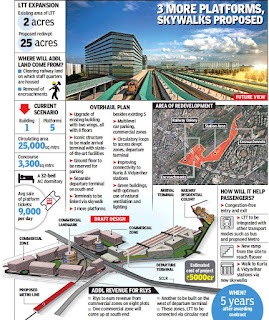 The Lokmanya Tilak Terminus,  one of the busiest termini in the city, will over the next decade get a complete makeover. It will sport executive lounges, a multi-level parking facility, a shopping plaza, five-star hotels, gyms, and separate arrival and departure terminals.

Amenities like escalators, lifts, verdant gardens, a concourse, walkways and travellators will also be offered.

An official from Indian Railway Stations Development Corporation, which has prepared a blueprint of the project, said the aim is to bring the terminus on a par with airports.

Encroaching slums bang opposite the terminus’ entrance will be removed to make way for two highrise commercial complexes that can accommodate 250 units each on a public-private partnership model. Several other commercial buildings will be developed on LTT’s 1-lakh sqm premises.

The railway colony abutting the tracks will be moved to the Vidyavihar station to create space for the commercial development. Train drivers’ lobby will also be moved there.

All passenger amenities, like waiting rooms, will be restricted to the arrival/departure terminals.

Three more platforms will be added; LTT currently has five.

A skywalk will be built connecting Vidyavihar and Kurla stations with LTT, and an exit ramp will be constructed that will connect the terminus directly with an arm of the JVLR.

Space will also be allocated for any future Metro line passing through the centre of the terminus.

The project will be implemented in four phases. The first will involve clearing encroachments for construction of the departure terminal and a win of the arrival terminal, platforms, ramps and commercial units. Phase 2 will see construction of the other wing of the arrival terminal and the road to the new railway colony. In the third phase, the skywalk and the shopping plaza will be developed. Resettlement of encroachers and connectivity with a proposed Metro station will be done under phase four.

The railway official said the blueprint has been sent for approval from the Central Railway. “Once permission is granted, we will start the process of issuing tenders. Once work begins, it should take around 10 years for completion. The cost has not been estimated yet.”

LTT sees a footfall of around 1.5 lakh and handles 70 trains daily on an average.