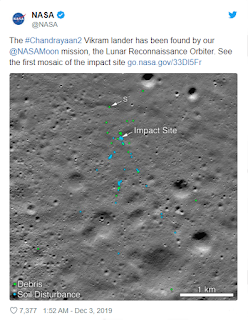 Nasa said its satellite orbiting the Moon has found Vikram lander of Chandrayaan-2 which crashed on the lunar surface in September. The US space agency also released an image showing the impact site of the lander.

In a statement, NASA said it released a mosaic image of the site on September 26, inviting the public to search it for signs of the lander.

It added that a person named Shanmuga Subramanian contacted the LRO project with a positive identification of debris -- with the first piece found about 750 meters northwest of the main crash site.

The Union government on November 20, confirming speculation about the lander’s fate, told the Parliament that it made a “hard landing” on the lunar surface on September 7.

Minister of state for space Jitendra Singh, in a written reply in Lok Sabha, said the lander on board the Indian Space Research Organisation spacecraft “hard landed within 500 m of the designated landing site”.

A successful mission would have made India just the fourth country after the US, the erstwhile USSR, and China to make a successful Moon landing, and the first on the lunar south pole.

Blasting off in July, Chandrayaan-2 dropped the unmanned lander Vikram for a descent that would take five days, but the probe went silent just 2.1 kilometers above the surface.

Days after the failed landing, the Indian Space Research Organization said it had located the lander, but hadn’t been able to establish communication.

Recently, Isro chairperson K Sivan said at an event the organisation will demonstrate a soft-landing on the moon in the near future.