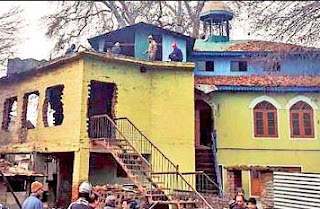 Residents of Qamarwari in Srinagar’s Rampora area have agreed to the demolition of a 40-year-old mosque in the locality, paving the way for the construction of a long-awaited bridge over River Jhelum. The project had been pending since 2002 due to opposition against the demolition of the mosque, Masjid Abu Turab, and several other structures, including some residential and commercial spaces in the area, officials said.

The mosque and other structures needed to be removed for building the 166 m long two-lane bridge connecting Qamarwari with Noorbagh in the city, the officials said. The bottlenecks were cleared after a series of meetings between the mosque committee executives, Qamarwari residents and Srinagar district development commissioner Shahid Iqbal Chowdhary to resolve the land acquisition issue.

Demolition work began on Saturday, 24 hours after the signing of an agreement between the DC and the managing committee of Masjid Abu Turab. The agreement included, among others, the DC’s offer to allot a separate land for the reconstruction of the mosque within 12 months, all expenses of which will be borne by the district administration, said officials.

The resolution has enabled authorities to restart the Rs.10-crore bridge project. “Work will be resumed and completed at the earliest,” said the DC. He said a plan has also been finalised for the relocation of other bottlenecks, which includes a fire station and 16 residential and commercial structures. He said alongside the construction of the said bridge, the district administration would undertake flood protection and beautification works along Jhelum and repair adjacent roads and install smart lighting in the area.

This is the second time in a month that the DC’s efforts have paved the way for the resumption of stalled work on vital projects. Earlier this month, he had successfully negotiated with the management of the historic Damdama Sahib Gurdwara at Zainakote, enabling resumption of expansion work on the Srinagar-Baramulla NH.