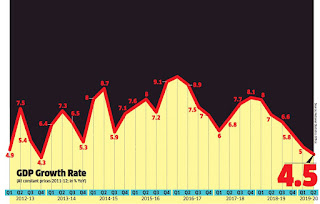 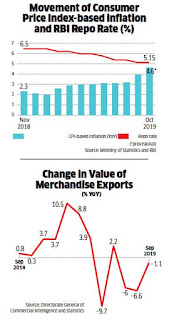 India’s gross domestic product growth has dropped to 4.5% in the July-September quarter of 2019-20, a free fall from the government’s ambitious call for a double-digit growth not so long ago. Propelling India into a $5 trillion economic behemoth by 2024-2025 also seems implausible now.

The fall has been sudden although not entirely unexpected. In the first quarter of 2016-17, India registered a spectacular GDP growth of 9.4%. Today, it’s struggling at a 26-quarter low.

Economists, statisticians and civil servants give mixed reactions. Former chief economic adviser to the government, Arvind Virmani, says the economy likely bottomed out in September or October. “So I expect Q3 growth to be higher than Q2. The issue now is what the government can do to accelerate growth recovery and reduce the time the economy takes to return to the 7.5% growth track,” he says.

What is Virmani’s prescription for now? “Besides monetary easing by the Reserve Bank of India, the government needs to simplify the GST and introduce a new direct tax code to clear the tax jungle created by our ancient income-tax law and rules,” he says.

As soon as the GDP numbers were announced, the Ministry of Finance tweeted, quoting Secretary Atanu Chakraborty, that growth would pick up from the next quarter, reiterating that the fundamentals of the Indian economy remained strong. The expectation of finance ministry officials seems to be in sync with some economists like Virmani.

Not all, however, agree that a quick turnaround is likely if the government fails to undertake a course correction. Former chief statistician of India, Pronab Sen, argues that the FM’s recent packages have focused too much on the supply side. He wonders if these measures would propel a quicker recovery. “The FM’s measures don’t address the problem of demand contraction. I don’t see a recovery out of those,” he says, adding that the economy will recover in two or three quarters only if the government quickly shifts its attention from mega highway projects to smaller core sector activities that have a quicker turnaround time. He also advocates increasing rural outlays to boost liquidity, create demand and thereby incentivise India Inc to invest more.

There has been suspicion that India’s profit-making companies might have ended up using the massive corporate tax cut to strengthen their books rather than to invest the new-found savings in building factories and offices, which would have spurred growth. In September, the Centre announced slashing the corporate tax from 30% to 22% for companies not availing other tax breaks, and from 25% to 15% for new manufacturers.

“The state governments, Union territories and the Centre would need to ensure quick disbursement of payments due to the private sector, so that liquidity improves in the economy,” says Shailesh Pathak, CEO, L&T Infrastructure Development Projects. He says highway toll collections indicate that the worst is behind us, especially from late October 2019.

Not everyone shares that optimism. Former industry secretary Ajay Dua does not see the economy recovering anytime soon. He blames the government and its think tank NITI Aayog, in particular, for living in denial till mid-August about the slowdown. The FM’s first intervention came only in the second half of August, meaning the government did not do much for a big part of Q2, which eventually resulted in a muted number.

“The slew of measures announced by Finance Minister Nirmala Sitharaman will have an impact only in the medium term. I expect the economy to start recovering from June-July next year, provided we have a good monsoon,” says Dua, arguing that the government must release two instalments of PM-Kisan (₹4,000) at one go as well as increase the MGNREGS allocation to spur rural demand.

However, the GDP growth rate going below the 5% mark in the second quarter is not a bolt from the blue. There have been multiple indicators in the recent months — be it the 4.3% contraction of factory output for September, the shrinkage of merchandise exports in the successive months of August (-6%) and September (-6.6%), and then, the RBI survey suggesting that the consumer confidence dropped to a six-year low in September.

The government tried to avert the crisis. First it withdrew the super-rich surcharge levied on foreign portfolio investors and then rolled out a series of measures, including corporate tax cut and the proposal to set up a ₹25,000 crore fund to revive the realty sector.

The RBI, for its part, has already lowered its benchmark interest rate (repo rate) five times during this calendar year, taking the cumulative cuts to 135 basis points, from 6.5% in January to 5.15% in October, even as the Consumer Price Index-based inflation shot up from a paltry 1.97 to a mildly worrisome 4.62. How much more will the central bank yield, as its stated priority has always been to curb inflation first? RBI’s monetary policy committee, which will meet this week, may consider marginally reducing the interest rate.

For the government, the headroom to spend money has shrunk after it slashed the corporate tax, taking a hit of about ₹1.45 lakh crore. The monthly collection of GST, stuck below the ₹1 lakh crore mark since May, has been a concern for the government. To avoid further economic turbulence, the Centre has pressed the pause button on banning single-use plastics as well as the quick replacement of fossil fuel-guzzling automobiles with electric vehicles. The present state of economy has clearly reversed the government’s intent of being environmentally smart.

The government cannot take solace from the argument that the economy may have bottomed out if India has to replicate China’s fast growth.

Today, China’s $14 trillion economy is about five times as big as India’s $2.9 trillion. And according to the UN’s 2019 World Population Prospects report released in June, India will have more people than China by 2027. India will have to grow at 8-10% to sustain this huge population. While China’s economy grew only 6% in the July-September period, its weakest pace in over 27 years since 1991, the country’s GDP growth surpassed the double-digit mark for 10 years and was 10% and above between 2003 and 2007.

For the government, the low Q2 GDP growth numbers should be a clear sign it is time to go full throttle to put the economy on an upward trajectory.