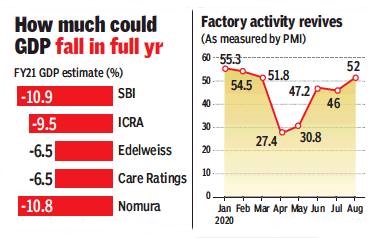 Activity in the country’s manufacturing sector rebounded in August after four months of contraction, led by an increase in new orders. The data provided some relief from the grim economic numbers in recent months that showed the economy contracting by a record 23.9% in the June quarter.

The survey showed that output and new orders expanded at the fastest pace since February. But job cuts continued into August, extending the current sequence of decline to five months.

The IHS Markit India Manufacturing PMI rose to 52 in August from 46 in July, signalling some improvement across the manufacturing sector. The 50-point mark separates expansion from contraction. The strict national lockdown imposed to contain the spread of the coronavirus has hurt the overall economy and led to job losses, heaping misery on businesses and workers. The survey is compiled from responses to questionnaires sent to purchasing managers in a panel of around 400 manufacturers and serves as an advance indicator of manufacturing conditions.

Data released on Monday showed the country’s GDP contracted 23.9% in the April-June quarter — the period when the lockdown was in place — with the manufacturing sector declining 39.3%. The key sector has been in the midst of a sharp slowdown and has been contracting for four consecutive quarters. Separate data showed the eight core sectors contracting for the fifth consecutive month in July although the pace of contraction narrowed.