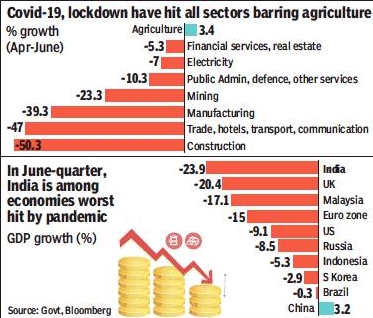 India’s economy posted its steepest contraction on record in the April-June quarter of the current fiscal year as the strict lockdowns imposed to arrest the spread of Covid infection stalled economic activity, shut out consumption and investment, and led to job and income losses. Asia’s third largest economy was already faltering when the pandemic struck.

GDP in April-June of 2020-21 slumped 23.9% compared with a growth of 3.1% in the previous (Jan-March) quarter. Among major economies, India’s contraction was the sharpest. China, after posting a contraction in the Jan-March quarter has recovered with a 3.2% growth in April-June. Globally, India is close to UK’s contraction of 20.4% in the second quarter.

Agriculture was the only bright spot in India. The sector, which has benefited from a robust monsoon, rose an annual 3.4% in April-June compared to a growth of 3% in the corresponding quarter of 2019-20.

Recession deepened in the manufacturing sector as it posted four consecutive quarters of contraction while construction declined for the third quarter in a row. Economists define recession as two consecutive quarters of negative growth. Manufacturing and construction shrank 39.3% and 50.3% respectively during April-June. Trade, hotels, transport and communications -- part of the services sector -- posted the second highest contraction of 47%.

As a whole, services, which accounts for nearly 60% of the economy, slumped 20.6% in April-June compared to 4.4% growth in the previous quarter. Hotels, restaurants, hospitality and airlines, have borne the maximum brunt of the slowdown. Private consumption, a key driver of the economy, witnessed a sharp decline of 24.5% in the first quarter from a 8.5% increase in the year-ago period. However, government consumption saw a 20.2% increase in the June quarter compared with a 9.5% growth in the same period of the previous year. This highlights the role of government spending in supporting the economy.

According to a Care Ratings analysis Investment growth witnessed a sharp decrease of 47.9% in the June quarter. As a percentage of GDP, investments (as measured by the Gross Fixed Capital Formation) at 19.5% during the quarter was the lowest under the new series (2011-12). Chief economic adviser Krishnamurthy Subramanian said the contraction was expected given the lockdown that happened globally. “India is definitely experiencing a V-shaped recovery.  Economists said the sharp contraction will prompt the RBI to go in for rates cuts to lift growth. Inflationary pressures have prompted the RBI to press the pause button in its rate cutting cycle.