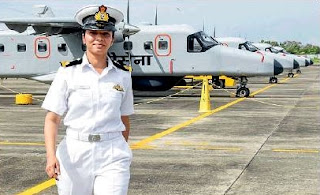 Commissioned in 2017 in the second batch of women fighter pilots, Flight Lieutenant Shivangi Singh is currently undergoing conversion training and will shortly become a part of 17 Squadron, the Golden Arrows, in Ambala.

She has been flying MiG-21 Bisons since her commissioning. It was a proud moment for her family members in Varanasi after she was selected to be among those who would fly the freshly-inducted Rafale fighter. Her family members celebrated with a feast on Wednesday at their modest dwelling in Phulwariya area of Varanasi.

Shivangi and another flight cadet, Pratibha, from Rajasthan, received their wings during the combined graduation parade of pilots and ground duty officers at Air Force Academy, Dundigal, near Hyderabad, in December 2017.

After her schooling and graduation, Shivangi joined 7 UP Air Squadron NCC at Banaras Hindu University to fulfil her dream. After her selection through the common aptitude test, she went to the Air Force Academy for training in July 2016. Her induction into the Golden Arrows squadron comes at a time when the Rafale jets are being fully operationalised.