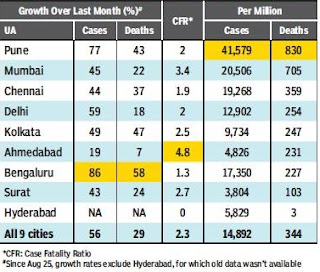 Pune has the highest number of Covid cases and deaths per million population among the country’s nine largest megapolises with over 5 million population. But Bengaluru is where the situation appears to be worsening fastest, with the city having the highest growth in cases and deaths over the last one month. Ahmedabad continues to have the worst case fatality rate of 4.8, though it has come down over the last month.

Pune, Mumbai and Chennai, in that order, have the highest number of Covid cases and deaths per million population. Pune has overtaken Mumbai in the last one month.

Pune, Mumbai and Chennai are followed by Bengaluru in terms of cases per million, but with a resurgence of the disease in recent weeks, Delhi is in fourth place with in terms of deaths per million with 254 fatalities per million.

The case fatality rate, or the number of deaths for every hundred cases, has come down in all nine cities over the one-month period, which might indicate better management of hospitalised cases or that cases are now less severe than they were. Delhi and Mumbai have seen the greatest reduction in CFR, followed by Ahmedabad and Pune.

However, with the exception of Hyderabad and Bengaluru, these cities have higher CFRs than the national average. Ahmedabad, Mumbai and Surat continue to have the highest CFR among these nine urban agglomerations, a term used to describe contiguous urban areas that are for all practical purposes one city, for example, Mumbai, Thane and Navi Mumbai.