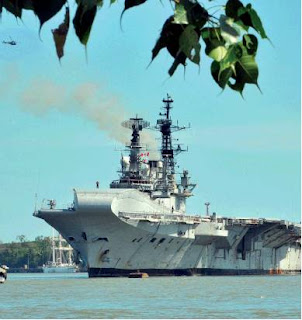 Decommissioned aircraft carrier of the Indian Navy, Viraat will be towed to the Alang Shipbreaking Yard in Gujarat on Saturday morning where she will be dismantled. Viraat was India’s second aircraft carrier.

The earlier plan was to tow her away on Friday, but it was shelved due to bad weather.

Officers of the western naval command said that the ship will be first pulled out from the western command’s pier with the help of Mumbai Port Trust tugs. Thereafter, the two tugs brought to tow her away will take over. She will be escorted by naval helicopters till she is moved to the western coast. Thereafter, naval dornier planes will monitor her movement. “It will take at least three days for her to reach Alang,” a naval officer said.

The carrier was sold for Rs.38.5 crore and was bought by Shri Ram Green Company and the auction was done by Metal Scrap Trading Corporation. The navy had offered Viraat to many states. The Maharashtra government was to station her at Nivti and make her into a convention centre-cum-hotel along with a private partner. Andhra Pradesh had also shown keen interest in it. Viraat, the second Centaur-class aircraft carrier, was in service for 30 years before being decommissioned in March 2017. There were proposals in the past to preserve it as a maritime museum. But later every state that had earlier shown interest backed out. Viraat was occupying an important space in the naval dockyard and as a result, other ships had to be kept away.

Vice Admiral Shekhar Sinha (retired), who had flown on all three aircraft carriers, Vikrant, Viraat and Vikramaditya, said, “It is sad that we have not been able to preserve even one of the two aircraft carriers which represented full one service of Sea Harrier (straight takeoff and vertical landing) aircraft.