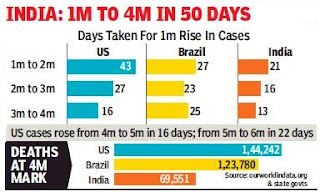 Covid-19 cases in India raced past 4 million, just 13 days after hitting the 3 million mark, even as fresh cases in the past 24 hours surged to a new high of over 87,800. This was the third consecutive day of highest rise in new infections.

India is the third country after the US and Brazil to record 4 million cases. While India took the longest time for cases to increase from one to 1 million (168 days), its subsequent growth in infections has been the fastest.

Cases in India have grown from 1 million to 4 million in 50 days, while it took 75 days in Brazil and 86 days in the US. The last million was in just 13 days—the fastest million so far— with previous being 16 days, recorded in both India and the US. However, India’s fatality rate remains the lowest among the three worst hit countries, less than half the mortality rate in the US.

At the 4 million mark, India has recorded 69,551 fatalities from the virus.

At the same stage, the US had reported more than 1.4 lakh deaths and Brazil over 1.2 lakh.

On Friday, India recorded a rise of 87,852 fresh cases, as per the last 24-hour data. Deaths from the infections numbered 1,062, the fourth straight day of 1,000-plus casualties in the country. Active cases rose by 17,000, the biggest single-day rise in quite some time, to nearly 8.5 lakh. Recoveries from the infection totalled nearly 31 lakh.

Besides Maharashtra, four other states reported their highest single-day surge in cases — Chhattisgarh (3,203 cases, including 1,515 from Thursday midnight), Haryana (1,884), Rajasthan (1,570) and Arunachal Pradesh (214).

Andhra Pradesh reported 10,776 Covid-19 cases on Friday, taking the cumulative caseload to 4,76,506, even as 76 more people died in the last 24 hours. While the overall toll jumped to 4,276, as many as 12,334 Covid-19 patients were declared cured on Friday, making it the highest single-day recoveries so far in the state.