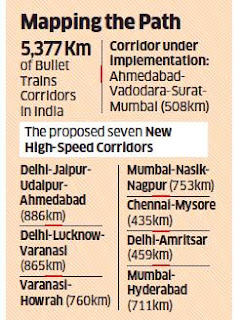 Would you prefer a high-speed train from Delhi to Ahmedabad, which would take just a little over three hours to cover the 886-km distance, to going by air, road or a regular train?

This is the second bullet train project being planned in India and it would connect into the high-speed rail corridor from Ahmedabad to Mumbai, on which work is underway, thereby offering a fast train option from Delhi all the way to Mumbai.

The National High Speed Rail Corporation has started inviting tenders for preparing feasibility studies for seven new HSR corridors which, along with the Ahmedabad-Mumbai corridor could offer a network of 5,377 km of high-speed rail tracks in India if they are given the green signal.

“The contours of these projects will be known only once the detailed project reports are prepared. If we have a corridor from Delhi to Ahmedabad, which then links into Ahmedabad to Mumbai, lots of benefit will come to the people. We will definitely try for such continuity,” Achal Khare, managing director of NHSRCL said.

The key to the feasibility of these routes is a ridership survey, since the bullet train is expected to cost much more than regular trains. One such ‘willingness to pay survey’ is set to be conducted by NHSCRL for the Delhi-Ahmedabad route. This would involve interviewing about 6,000 air, road and normal rail travellers on the Delhi-Ahmedabad route to estimate the expected shift from the existing modes to HSR.

Such a survey, which is expected to be done for all the seven new corridors, will also study the traffic demand potential, traffic data for the past five years from the toll plaza operating on the national highways and expressways, and data for rail travel and air travel for the past five years. Economic indicators such as the gross domestic product of the country, the state GDP and district domestic product for previous years since 2011-12 will be studied too as part of these ridership surveys.

The planned routes have been selected in anticipation of high passenger traffic and because they will offer onward connections to similar high-speed trains. The 886-km Delhi-Ahmedabad route, for instance, is proposed to have 16 stations en route.

“We are very optimistic about this project as not only will it connect the national capital with Ahmedabad through Jaipur, Ajmer, Chittorgarh and Udaipur, which get a lot of foreign tourists, but also connect further into the ongoing Ahmedabad-Mumbai corridor, offering one an option to reach Mumbai from Delhi through a fast-train connection,” said a senior government official, who did not wish to be identified.

Existing challenges on the ongoing 508-km Ahmedabad-Vadodara-Surat-Mumbai corridor, however, put a question mark on the future of the new corridors and their cost, especially at a time when the economy has taken a beating following the Covid-19 pandemic. The government said last week that the pandemic had delayed the land acquisition process and tenders for the corridor, and that though the project should meet its 2023-end deadline, the real time frame for the completion has to be reassessed after six months. Only 63% of the land has been acquired so far and 81% of the Rs.1.08 lakh crore cost of the project is to be funded through a 20-year loan from Japan International Cooperation Agency.

“Land acquisition is a challenge in any linear project. To minimise that, we are trying to plan the HSR corridors along the new expressways and national highways,” said Khare.

The government believes that the benefits would outrun the costs. “NHSRCL would be ushering India into the category of a few countries (about 15) using the high-speed railway system,” says the bid document. “Apart from being a technological marvel, HSR corridors would afford many quantifiable benefits like saving in travel time, vehicle operation cost, reduction in pollution, job creation, reduction in accidents and enhanced safety, imported fuel substitution, and reduction in pollutants. The project would also boost the infrastructure and add to the growth of the economy.”