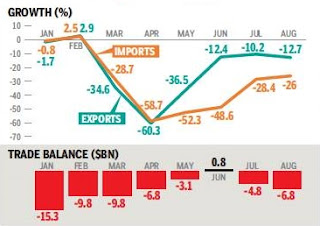 India's exports contracted for the sixth consecutive month in August, dragged down by a decline in shipments of petroleum, leather, engineering goods, and gems & jewellery, while imports tumbled by 26% during the month.

Gold imports shot up to $3.7 billion in August compared to $1.4 billion in the same month last year. During April to August, exports contracted by nearly 27% to around $98 billion, while imports fell almost 44% to $118 billion.