Annual FPI inflows for India near $20bn mark this year 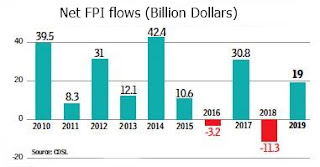 Inflows from foreign portfolio investors into India is nearing the $20-billion mark in 2019, with a majority of the funds — $14.2 billion — expected through the equity route. The debt segment may contribute around $3.5 billion. The total flows, however, still remain less than half of the all-time high annual inflow figure of $42.4 billion recorded in 2014.

During 2019, the biggest net inflows were seen in March and November, while August and January witnessed net outflows, official data showed. Also, the net equity inflow during the year crossed the Rs.1-lakh-crore mark.

FPI flows in 2020 are expected to see a boost from the recent government directive under which the statutory foreign holding limit in a company was changed from 24% to the sectoral foreign investment limit effective April 1, 2020. “This implementation will lead to MSCI India’s weight in the MSCI EM (Emerging Market) to rise. Using the current list of constituents, we expect MSCI India’s weight to rise by about 70 basis points in the semi-annual index review of May 2020, implying passive inflows of $2.5 billion,” a report by foreign broking major Morgan Stanley noted.

The MSCI is one of the most followed indices among foreign fund managers and a large number of foreign funds are benchmarked to this. Currently, India has an 8.9% weight in MSCI’s EM index which is seen rising to 9.6% by next May.

A report by Kotak Institutional Equities that tracks foreign fund investments coming into India showed that, in 2019, foreign-origin mutual funds registered as FPIs here have maintained their total assets under management in the country at about $150 billion through the year, while assets management by pension funds showed a marginal rise.

The year also saw the government increasing the limit for foreign funds to invest in government debts. According to a report by IMF, this decision could help Indian bonds enter the global bond indices. At present, given the huge restrictions on FPIs to invest in gilts, Indian bonds are not eligible to be among the constituents of those indices.

An IMF report said that given the government’s decision to further increase FPI limits on non-resident holdings of government securities, “consideration could be given to entering global bond indexes, at least for some bonds, and facilitate clearance and settlement for non-resident investors”.