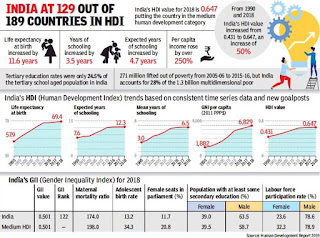 India climbed one spot to 129 among 189 countries in the 2019 human development index, according to a report released by the United Nations Development Programme.

In India, 27.1 crore people were lifted out of poverty from 2005-06 to 2015-16, UNDP India resident representative Shoko Noda said while releasing the UNDP's development report 2019 ‘Beyond income, beyond averages, beyond today: Inequalities in human development in the 21st century’.

India’s development initiatives like the Pradhan Mantri Jan Dhan Yojana (for financial inclusion) and Ayushman Bharat (for universal health care) were crucial in ensuring that “we meet our promise to leave no one behind and fulfil PM’s vision of development for all”, she said.

Noda said the steady progress of India was due to nearly three decades of rapid development, which had seen a dramatic reduction in absolute poverty, along with gains in life expectancy, education, and access to health care. As per the HDI, no other region has experienced such rapid human development progress, she said.

Noda said for countries like India, which had shown great success in reducing absolute poverty, “We hope that HDR 2019 sheds light on inequalities and deprivations that go beyond income. How we tackle old and new inequalities, ranging from access to basic services such as housing to things like access to quality university education, will be critical to whether we achieve the Sustainable Development Goals”