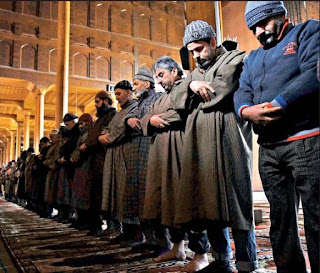 The Anjumane-Auqaf (masjid management committee) opened the doors of the Jamia Masjid in Srinagar, two days ahead of the main Friday prayers, and allowed people to offer namaz there for the first time since the nullification of Article 370 — a gap of 136 days.

Although the civil and police authorities had been asking the committee for the last one month to open the masjid for prayers, the committee, headed by Hurriyat chairman Mirwaiz Umar Farooq, had avoided opening it.

The minarets of the historic Jamia Masjid reverberated with the afternoon prayer calls on Wednesday as the Anjuman-e-Auqaf started cleaning the mosque as it was closed for 136 days. Around 100 people offered prayers in the mosque.

“I was surprised to hear the azaan (prayer call). I was so delighted and rushed towards the masjid,” said Bilal Ahmed Phaboo, a Nowhatta resident.

“We were demanding the moving out of the security forces from near the main gates of the mosque, to which the authorities agreed. We are hopeful that Friday congregational prayers will also be offered,” said a senior Auqaf member. Emotional scenes were also witnessed with elderly men and women kissing the pillars and walls of the mosque.