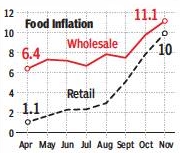 Food inflation jumped to a 71-month high in November, pushing wholesale price inflation to a higher trajectory, and breaking a 3-month trend of deceleration.

Inflation, as measured by the wholesale price index, rose an annual 0.6% in November, higher than the 0.2% in October, but lower than the 4.5% recorded in the year-ago period.

The increase in inflation during November was largely led by a sharp surge in food items that shot up an annual 11.1% during the month, rising from the 9.8% posted in the previous month. Earlier data showed that food inflation under retail inflation had shot up to double digits in November after nearly six years, led by a surge in vegetable prices. Onion price inflation rose 172.3%, rising from 119.8% in October. Vegetables rose an annual 45.3% during the month, up from 38.91% in October.

Inflation in manufactured goods continued to witness deflation for the third straight month at (-) 0.8%, unchanged from a month ago and lower than the 4.2% recorded in November 2018, which economists said indicated a lack of pricing power for manufacturers.

Economists expect the RBI to hold rates given the uptick in inflation.