Economy Grows at Slowest Pace in Over 6 Years 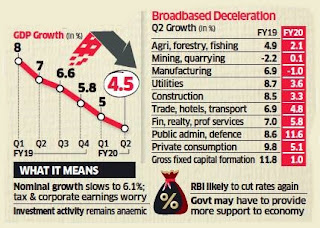 India’s economy grew 4.5% in the July-September quarter, the slowest pace of expansion in over six years, raising expectations of further interest rate cuts when the Reserve Bank of India reviews monetary policy next week. The government has already indicated its willingness to address sectoral stress.

Gross domestic product grew 5% in the June quarter and 7% in the September quarter last year. In the first six months of the current fiscal, GDP growth was 4.8% compared with 7.5% in the year earlier. The slowest quarterly pace of expansion before this was in January-March 2013 at 4.3%.

The government said the economy had bottomed out in the September quarter and expects growth to pick up.

Independent economists expect the weakness to continue for the rest of the fiscal. ICRA sees a downside risk to its GDP growth projection of 5.8% for FY20. The Indian economy grew 6.8% in FY19.

Depressed consumer sentiment, lacklustre global economy and trade, stress in the nonbanking financial services sector and a leveraged corporate sector have all contributed to the slowdown.

China’s economy grew 6% in the July-September period, its weakest expansion in over 27 years.

The government has indicated its willingness to take more steps to address trouble spots.

Over the past few months, the government has slashed corporate taxes, set up a ₹25,000 crore fund to revive stalled real estate projects, cut the GST rate for more goods and eased foreign direct investment rules for some sectors besides announcing another round of bank consolidation and a big-bang privatisation.

The lower growth is expected to force another round of interest rate cuts despite a spike in retail inflation to 4.62% in October. The RBI has already cut its key policy rate by 135 basis points since January. A basis point is 0.01 percentage point. The next monetary policy announcement is due on December 5.

GVA was 4.3% in the second quarter against 4.9% in the preceding one. The decline in growth was led by manufacturing, which saw a 1% contraction in GVA against a 6.9% rise in the corresponding quarter last year.

The manufacturing decline stemmed from slower demand, with private consumption rising 5% in the September quarter against 9.8% a year ago, though that’s an improvement over 3.1% in the June quarter this year.

Investment growth, as measured by gross fixed capital formation, slowed further to 1% in the second quarter from 4% in the preceding quarter and 11.8% in the year earlier.

Agriculture grew 2.1% in the September quarter, little changed from a 2% rise in the trailing quarter. Construction slowed to 3.3% from 8.5% in the corresponding quarter last year.

The financial sector was up 5.8%, ahead of a 4.8% rise in the trade, hotel, transport and communications sectors.

Nominal GDP, without adjusting for prices, rose 6.1% in the September quarter from 8% in the previous quarter and 12% in the corresponding quarter last year.

The growth slowdown will have a bearing on tax collections and likely heighten the government’s fiscal challenge. In the first six months, nominal GDP growth was 7% against 12.3% in the same period last year and 12% estimated in the budget for FY20. The slower nominal GDP growth may make it harder for the government to achieve the target of a $5 trillion economy by FY25.

The lower nominal growth will also make achieving the fiscal deficit target difficult. The government has budgeted a fiscal deficit of 3.3% of GDP assuming a 12% rise in nominal GDP in FY20.