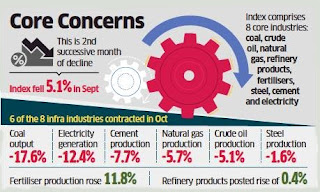 The core sector index has nearly 40% weight in the index of industrial production, suggesting further deterioration in industrial performance from the 4.3% contraction in September, the worst performance in the series that began in April 2012.

On a cumulative basis, the core sector grew a marginal 0.2% in the April-October period as against 5.4% the year ago.

Six of the eight infrastructure industries contracted in October. Coal output contracted 17.6% in October while electricity generation declined 12.4%. Production of cement fell 7.7%, that of natural gas 5.7%, crude oil 5.1% and that of steel 1.6%. Fertiliser production increased 11.8% year-on-year while refinery products posted a modest 0.4% rise.

Steel and cement have been pulled down by the base effect because government spending otherwise, which is the main driver, has been positive.

The extended monsoon in the country has also dampened infrastructure and construction activity.

There has been some sign of improvement. Passenger car sales grew a marginal 1.4% in October after declining for 11straight months.