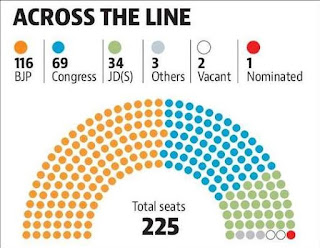 The four month-old BJP government’s gambit of fielding 13 defectors in the bypolls paid off big time as the party won 12 of the 15 seats that went to polls. Chief minister BS Yediyurappa now has an absolute majority with 117 seats in an assembly of 223.

The Lingayat strongman has emerged as the big winner of this election as he led the campaign. His strategy of rewarding defectors and promising them ministerial positions on victory — against much internal opposition from his own party men — worked with the voters seeming to prioritize stability over qualms about electing turncoats.

The Congress was a distant runner-up, winning just two seats. Former Prime Minister HD Deve Gowda’s Janata Dal Secular drew a blank. A BJP rebel who contested with the support of JD (S) was the lone independent to win. The saffron party had needed a minimum of six seats to stay afloat in Karnataka, the lone state ruled by the BJP in the south.

Accepting responsibility for the drubbing, Siddaramaiah resigned as the leader of opposition in the Karnataka legislative assembly and Dinesh Gundurao as Congress party state president. Neither of the resignations has been accepted yet.

The dismal show by JD(S) indicates dwindling support for it even in the Vokkaliga heartland of Mandya. The party managed to put up a tough fight in Yeshwanthpur and the independent it supported won from Hoskote defeating the richest candidate in these elections — MTB Nagaraj of the BJP.

With the landslide victory, Yediyurappa is set to consolidate his power and complete the remaining three-and-ahalf-years of his term comfortably. The win has helped expand BJP’s presence in the state as it has wrested nine seats from the Congress.

The bypoll also has put deputy chief minister Laxman Savadi, a former MLA, in the safe zone as he may be nominated as MLC in place of Congress’ Rizwan Arshad, who won from Shivajinagar in Bengaluru.