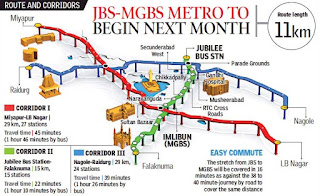 Following the trial runs which started on November 24 this year, metro rail officials confirmed that passenger services on the route would commence by the end of January. “Inspections by technical experts and engineers who have been conducting trial runs and tests to observe various critical parameters and performance have been going on for now and the operations will start by the end of January,” said HMRL managing director NVS Reddy.

The 11 km stretch via interchange station of Parade Grounds will provide better connectivity between JBS and Secunderabad stations and with the main stop at MGBS, it will make travelling easy for long distance commuters as well.

The entire stretch will be covered in 16 minutes as against the 38 to 40 minute-journey by road to cover the same distance. Officials inspecting the stretch during the ongoing trial runs are testing technical specifications and safety standards such as degraded mode operation tests and dummy passenger evacuation tests etc. Emphasis is also being laid on safe train separation tests, signalling and train control system. “Passenger operations will commence after the Commissioner of Metro Rail Safety gives a final safety clearance which is the CMRS safety certification of the corridor,” said Reddy.