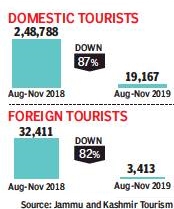 A little over 32,000 domestic tourists visited Kashmir between August and November, but like the verdant highland pastures now buried under snow, tourism in the Valley seems frozen in time. The four-month figure marks a steep decline of 87% from the 2.49 lakh domestic tourists Kashmir had hosted during the corresponding period last year. In terms of foreign tourist arrivals, the dip is 82%.

November was the best month of the season, with 10,946 domestic and 1,140 foreign tourists visiting the Union Territory — more than double the number of visitors in September. But for tour operators, the trickle of tourists since the ban on leisure travel to the Valley was officially lifted on October 10 is cold comfort.

Parvez Baba, owner of Hotel Samci Riviera at Rajbagh in Srinagar, has only four rooms out of 24 occupied this week. What’s more, he has had to offer these hotel rooms at half the normal rack rates. “My hotel is just three years old and I can’t afford to lose any business that comes my way. If I charge Rs. 4,000 per room, what chance do I have of getting a guest here?” said the hotel owner.

However, a few adventurous ones are seeking out the Valley as a never-before bargain of low footfall and rock-bottom rates. Robertson, an Australian skier who left Srinagar last Tuesday after spending three nights in Gulmarg with six friends, felt “perfectly safe” during the trip, although not having internet turned out to be a bigger challenge than he had imagined it would be. “I have visited Kashmir several times, mainly for skiing. But my friends and I had to cut short our stay this time because it was difficult staying in touch with our families back home without internet,” he said.

In June and July, when nobody possibly had an inkling of the tumult awaiting them in August, the Valley received 1.62 lakh and 1.49 lakh domestic tourists respectively. This was around 27% higher than the figures for the same period last year, according to J&K Tourism. Sources said the July number could have been higher had the Amarnath Yatra not been curtailed ahead of the August lockdown.

Between October and November, 21,413 domestic and foreign tourists visited Kashmir, less than a quarter of the figure for the same period last year. October’s contribution to this aggregate was 9,327 tourists.