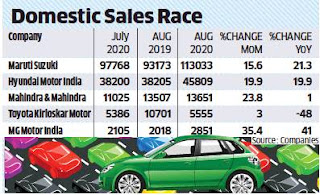 Monthly passenger vehicle sales shot up in strong double digits for the first time in nearly two years, as steady retail demand coupled with easing of constraints in supply chain after the lockdown helped produce and dispatch more vehicles in August.

The industry estimates around 234,000 passenger vehicles were dispatched from factories last month, about 20% increase compared with 195,800 units a year earlier. In August last year, the wholesale number had fallen almost 32% and that low base aided year-on-year comparison for last month. The estimated sales for last month were 18% more than in July.

Automakers in India report wholesale dispatches from factories to dealers and not retail sales made to customers. Industry numbers were buoyed by the performance of the country’s top two carmakers, Maruti Suzuki and Hyundai Motor India — sales for both grew by a fifth in the local market.

Hyundai Motor India’s sales rose 20% to 45,809 units. Tarun Garg, its director of sales, marketing & service, said good response to the new Creta, Verna, Tucson, Nios, Aura and recently launched Venue had helped performance. “We would like to carry on with cautious optimism as uncertainty still surrounds the pandemic,” he said.

At homegrown Mahindra & Mahindra, wholesale volumes grew marginally to 13,651 units. Chief executive (automotive division) Veejay Nakra said: “At Mahindra, we continue to see good recovery in demand for SUVs and pick-ups in the small commercial vehicles segment … We have been able to meet the uplift in demand by managing supply chain challenges and, going forward, will continue to keep focus on it.”

Toyota Kirloskar Motor reported a 48% plunge in sales to 5,555 units. Volumes, however, grew sequentially. Retail sales were 25% higher than wholesales. “August witnessed an increase in demand for most of our models akin to pre-Covid times, including customer enquiries and orders. However, supplying vehicles from our end (to dealers) posed a challenge due to rising number of Covid cases in Bengaluru (its factory is located nearby) and surrounding areas, where most of our workforce resides,” said Naveen Soni, senior vice president (sales & service)