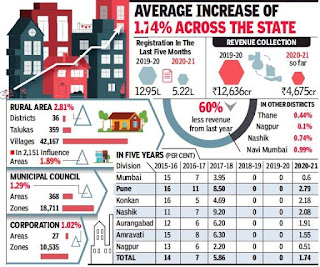 The Maharashtra state government announced an average hike of 1.74% in the ready reckoner rate for properties across the state, except for Mumbai where it reduced by 0.6%. The rates will come into effect from Saturday.

Pune district registered the highest hike of 3.91%, followed by Raigad and Nandurbar at 3% in the revision announced for 2020-21.

The increase for Pune Municipal Corporation areas is 1.56% and 3.41% in Pimpri Chinchwad limits.

The rate for the rural areas in Pune district was a high 8.62%, while it was 2.92% in the influence areas where infrastructure projects have been announced and 5.4% in municipal council areas.

Revenue minister Balasaheb Thorat said that the rates had to be corrected, and for the first time after a revision in the rules, it was reduced in some areas.

“We decided on a realistic rate. The RR rates were reviewed after 2017, and we found that in many areas, the rates were consistently high, and hence we rationalised them,” he said.

Developers had requested that the rates be reduced as they were very high in some areas, he added.

Ready reckoner rate is the standard value of an immovable property assessed and regulated by the state. New rates come into effect from April 1. But this year, the announcement was deferred to September for the first time by the revenue department due to the Covid-19 pandemic.

The fall in the rate for Mumbai is also a first. It was done as per the revised order in 2018 where RR rates could be reduced.

The ready reckoner rates were announced after recommendations from district collectors, interactions with people’s representatives, and realtors.

Thorat said the department had been working on the rates for the last six months. “We reduced stamp duty. The RR rates in most areas have been marginally increased or reduced,” he said.

The state government had reduced the stamp duty by 3% for the September-December period, and by 2% for the January-March 2021 period to boost sales.

Developers have been demanding a reduction in the RR rates. Credai national vice-president Shantilal Kataria said their members were taken aback by the increase in rates for Pune.

“It is surprising that the government announced a hike in the RR rates especially for Pune which is the most affected. They are the highest whereas we were expecting it to decrease. This system of deciding ready reckoner rates is not scientific,” he said.