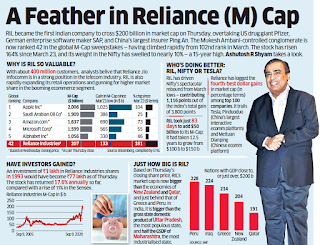 Reliance Industries became the first Indian company to cross the $200-billion market capitalisation mark after its stock surged over 8% on the back of reports that global retailing giant Amazon has been offered a $20-billion worth of stake in its retail venture.

From being an entity with a market cap of nearly $43 billion a little over five years ago and a pure-play business-to-business entity, RIL’s market value has risen almost five times as it scaled up its two consumer-focused businesses — telecom and organised retail — during the intervening period. In the process, it has leap frogged to become one of the 10 most valued companies in Asia and also among the top 40 globally. RIL is the only Indian company in these exclusive clubs, Bloomberg data showed.

The phenomenal rise in RIL’s market cap came during the past five years as it again transformed itself from being a major B2B focused company to a business-to-consumer entity, in a country with over 1.3 billion people.

As its refining business grew at a fast clip, RIL tried its hands at petro-product refining, but that didn’t take off as was expected. 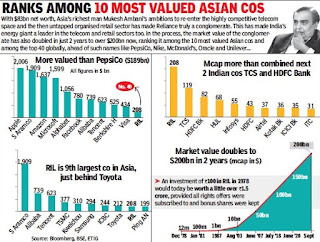