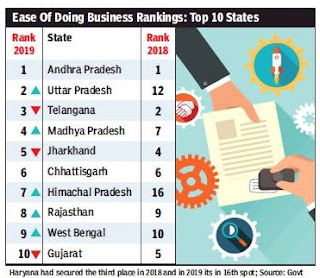 Uttar Pradesh has made a strong comeback rising to the second position in 2019 from 12th place in 2018 in the ease of doing business rankings. Himachal Pradesh moved up to the seventh place in 2019 from 16 in 2018. In the overall ranking, Delhi moved to the12th spot in 2019 from the 23rd place in 2018. The rankings for 2019 were to be released in March this year but had to be postponed due to the Covid-19 pandemic.

“India is seen taking the reform process seriously which showed when foreign direct investment in the country increased even during the Covid-19 pandemic, amid what was called the world’s strictest lockdown. Some states have shown extraordinary energy in putting together action plans and making sure that reforms happen. States have embraced the true spirit behind the State Business Reforms Action Plan," said Sitharaman while releasing the rankings.

The larger objective of attracting investments and increasing ease of doing business in each state was sought to be achieved by introducing an element of healthy competition through a system of ranking states based on their performance in the implementation of business reform action plan.